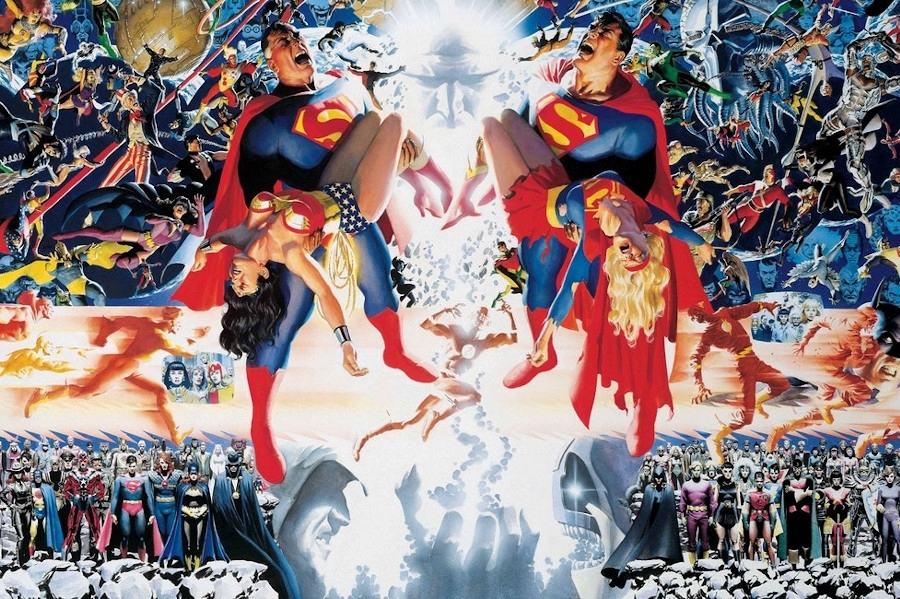 Crisis on Infinite Earths has been a stalwart reminder in comic history on what a crossover with lasting consequences should be. In this first Crisis of many, every single multiverse is being mysteriously and quickly destroyed and all of their heroes and villains with it. This winter the CW has launched their television event returning for its finale on January 14, Crisis on Infinite Earths featuring the main characters of their shows, Supergirl, Flash, Arrow, Batwoman, and more. It is being praised for its far reaching cameos from all of DC’s television and cinematic history but about how does it differ from the comic event titan?

In the television event, the Monitor calls upon seven paragons to stop the Anti-Monitors destruction. Those characters include Supergirl, White Canary, Batwoman, Superman/Lex Luthor, the second Atom, Martian Manhunter, and the Flash. This is something that is not touched on at all in the comics, though the multiverses mightiest heroes and villains are chosen by the Monitor to help against this impossible threat in the comic. (So no Dawnstar or Lady Quark?) As the twelve issue event goes on, heroes and villains are added and subtracted to the conflict, either being killed in the battles or dissolved by the ever looming shadow beings and anti-matter waves. The problem with this, is the issue with many live action adaptations, is rights and what characters they have already established. Many of the characters like Batwoman and White Canary were not present (or created yet) in the comic at all but are major players in this fight. In the comic, the Monitor has machines set up across the multiverses to stop the waves progress. Do these paragons take place of this? We will see how this creative choice shapes the end of this fight.

The television CW universe would not be here today without Oliver Queen. His importance in the comic event however, is much different. The Green Arrow only shows up a handful of times throughout, and though he does share the television fate of dying an untimely death, his death is shown in the last issue in one panel where a shadow being phases through him and we only know he’s truly perished on one of the last pages of the comic in a newspaper article new Wildcat is reading stating the Green Arrow amongst those perished. This is a far cry from his heroic “death” and rebirth in the show where he sacrifices himself so the team and his daughter can go on and is resurrected in a Lazarus pit by John Constantine and finds new purpose from the Spectre(?).

Two major players in the Crisis are Harbinger, the Monitor’s foster daughter also known as Lyla and Pariah, a Sisyphus type character/disgraced scientist doomed to watch the destruction of all worlds appear in the television event but with different duel identities and different roles to play throughout. This iteration of Harbinger is the character Lyla Michaels, the wife of Arrow series regular John Diggle. Though a different character in the CW’s Arrow, her role remains largely unchanged from the comic of originally gathering the heroes for the Monitor and later being possessed to do the Anti-Monitor’s bidding. Though in the TV version her betrayal causes the destruction of the Monitor, the Waverider, and Earth-1. Pariah is portrayed as the character Nash Wells, who does not appear in DC comics, who has appeared as many characters across the CW universe. His place in the story too is similar to that of his comic counterpart but in the show his is an explorer searching for the Monitor’s powerand is placed into the role of Pariah for his arrogance, while in the comic Pariah was a scientist on his home Earth and pushed his knowledge seeking too far and his hubris led to the freeing of the Anti-Monitor and beginning the Crisis in the first place.

The Anti-Monitor is the anti-matter counterpart to the Monitor who seeks to destroy all of the multiverses to replace with an anti-matter universe created in his likeness. The Monitor and Anti-Monitor are a dyad, and were created concurrently in the birth of all universes and as ones power diminishes the other grows stronger. We have seen very little of the Anti-Monitor (who bears a striking resemblance in this version to Marvel Thanos just with his blood drained in my humble opinion rather than his bullet looking helm of the comics) in the three episodes we have seen thus far, so we don’t know yet just how much he will differ but we are eager to see it unfold!

Green Lantern is one of my all time favorite DC superheroes and I lament the loss of these characters in the CW universe at large (though maybe not for long.) In the comic, the Guardians of Oa are partially responsible for the creation of the Anti-Monitor. The Oans were an idyllic advanced society before all civilizations and before the creation of the Lanterns or Manhunters, there was a split between Oans or over advancing their research much like Pariah eons later in searching for the origin of the universe. The Anti-Monitor existed in the anti-matter opposite world of Oa called Qward and when an Oan scientist viewed the hand of the Anti-Monitor coming forward into our universe the Crisis and the end of worlds truly began. The Green Lanterns were created to combat this threat and the threat the Guardians perceived themselves of having fearing their hubris would be their downfall which it ended up being. I’s been tiptoed around that John Diggle could be the Green Lantern of Earth, aka John Stewart who was a key player in the Crisis comic. Fingers crossed we see more of the Corps in the future!

Flash and the Cosmic Treadmill

Barry Allen plays a huge, though behind the scenes, role in the comic event, destroying the anti-matter cannon and also destroying himself with hardly a soul knowing the truth of his heroics. In episode three of the TV event, Flash, Vibe, Black Lightning and others find the anti-matter cannon but with it they find a familiar face running eternally to power it. It is non other than Jay Garrick Flash forced by the Anti-Monitor to power his machines and it is he who is saved but destroyed. In the comic the cosmic treadmill is used by Kid Flash and Jay Garrick to get the heroes to the planet Qwark to have their final showdown with the Anti-Monitor but that too seems to have been changed. The Flash has a famous death in the comic event, was this avoided by the killing of Jay? We have to watch to find out!

Already the crossover event has shown many callbacks to DC’s long history in media, even showing properties like Titans, Smallville, Batman ’89, and more (Birds of Prey anyone?), but a big surprise to me was the additions of the equally famous comic event (which took place years after Crisis) Kingdom Come. In two separate universes shown in the show, we see the Kingdom Come iterations of Superman and Batman. Kingdom Come was a DC Elseworlds event taking place in an uncertain future with a burning tension between the heroes of the time pushing their ideals to the brink. In the CW event, Bruce Wayne (played by B:TAS’s own fantastic Kevin Conroy) has the same mechanical supports to his broken body of a man who won’t stop fighting even until he becomes a man unrecognizable in image and beliefs. He is visited by Batwoman and Supergirl as he is believed to be one of the Paragons they are searching for but in horror of discovering that Bruce killed that world’s Superman, Kate Kane (Batwoman) kills him before it is revealed that she herself is the paragon they are searching for. This serves as great foreshadowing for what may come between the CW’s World’s Finest, but the Superman they discover is played by Legend of Tomorrow’s Brandon Routh (the Atom),and he shares the fate of his comic counterpart with the Joker’s gassing of the Daily Planet and the same costume. Obviously, Kingdom Come was not published at the same time of Crisis on Infinite Earth’s but to see them in live action is a welcome sight.

Like Harbinger and Pariah, the Monitor has another ace up his sleeve, and that is Alexander Luthor Jr., the son of Earth 3’s only hero against the Crim Syndicate before it is destroyed. He follows the same path of the Caped Crusader before the anti-matter wave destroys his universe as an infant, Alexander Luthor Sr. and Lois Lane send their child to another multiverse where they pray he’ll be safe, mirroring Clark Kent’s flight from Krypton. He rapidly grows into a young man with a body possessed of both positive and anti-matter which makes him a great asset to the heroes in their plight against the Anti-Monitor and eventually brings peace to abandoned heroes at the epic’s conclusion. In the CW story, Clark and Lois of Supergirl’s universe fear for their lives and send their son John in a similar fashion so he may play a similar role? Though there was another son of Superman in the comic event. It’s too early to speculate, but it remains to be seen how the infant’s role will be molded for the story.

A key player from the comics was seen in last years CW event Elseworlds but has not been seen or mentioned in Crisis on Infinite Earths. He is a master manipulator of emotions and is the Anti-Monitor’s stooge. He is responsible for keeping the Flash captive for a majority of the event and at the story’s conclusion is one of the only characters to remember what happened in the Crisis. I am certain he will reappear but to what capacity?

This is not nearly all of the differences, just with characters alone it would take a much longer post but despite its differences, this event is certainly taking shape of greatness on its own. Never before in television history has their been a crossover this ambitious in scope and I am anxious to see its conclusion. But despite all this my main takeaway from the comic was hope, especially in characters like Flash and Supergirl’s sacrifice (though we’ve yet to see if the television characters will traverse down this same path.) If the show can till fill the feeling for hope that things can and will get better, that good can triumph over evil, then I’m sure the finale will be a great success. What differences did you find major? Leave a comment or come in and talk to any Bedrock Citizen about how you feel about the comic and the show!

If you’re enjoying the DC CW shows be sure to give these comics a read as well! (Plus check the links for Crisis on Infinite Earths and Kingdom Come the graphic novels!