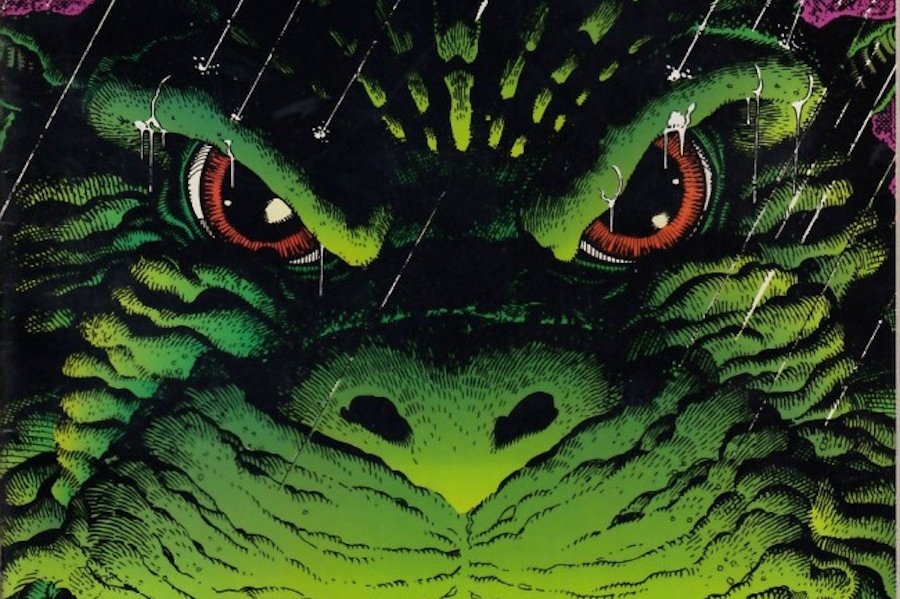 With Godzilla vs. Kong releasing this week, I think it is time to shed some light on the comics that may have been forgotten through Godzilla and Toho’s long running monster history. I went back through and read some of his greatest exploits with fresh eyes and hope it gives some insight on history’s greatest monster before he once again hits the big (and small, thanks HBO Max) screen! Here at Bedrock City we are huge kaiju fans and carry a huge array of comics and merchandise so come on in and share your thoughts on the film or peruse our shelves at any of our six Houston area locations! 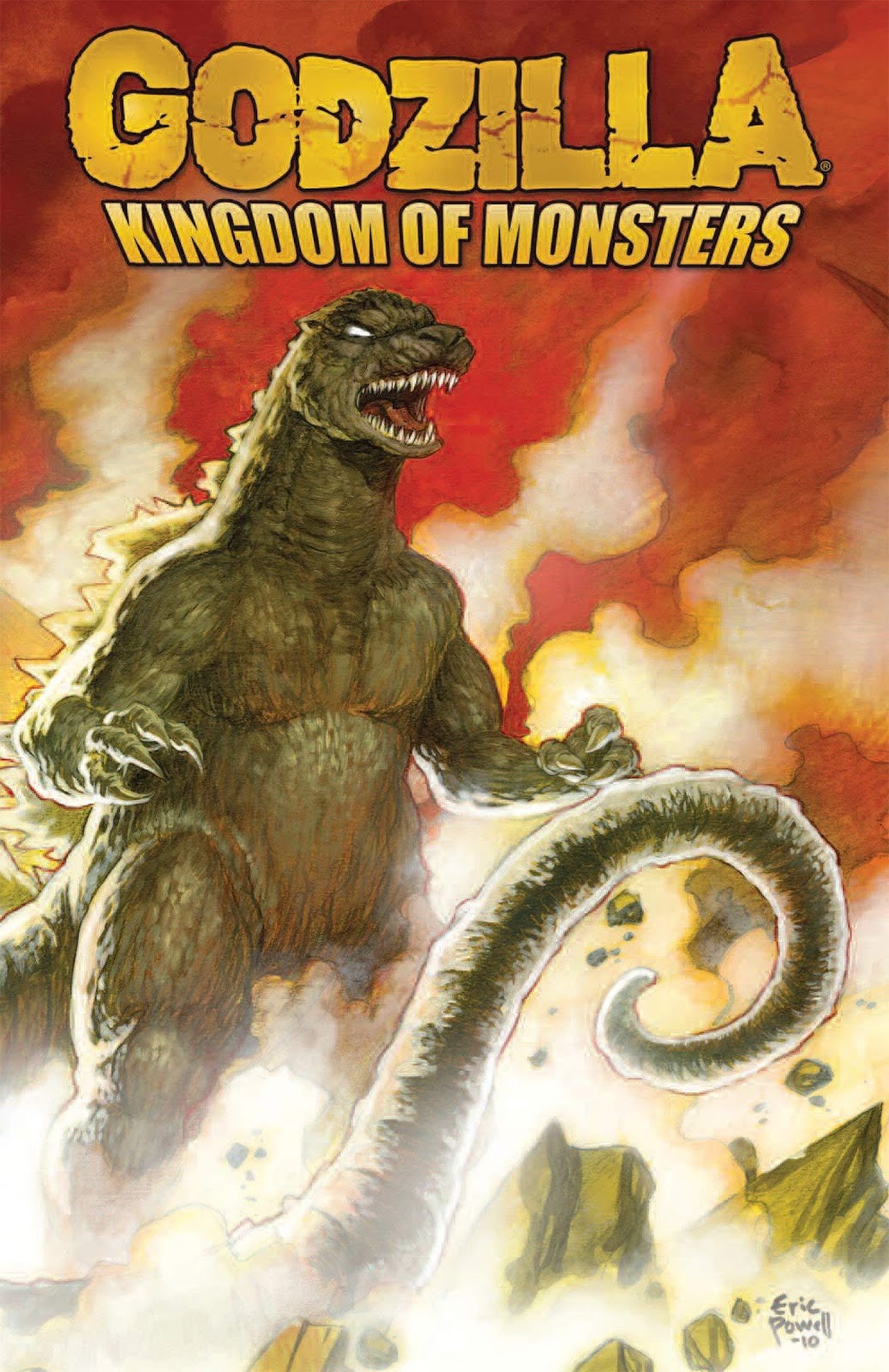 Godzilla Kingdom of Monsters (2011) is the first major Godzilla comic published since 1998, and was able to have many of the Toho monsters in the story as well for the very first time in comic format. Written by Eric Powell (Goon) and art by Phil Hester (Green Arrow), the story showcases Godzilla as he appears off the coast of Japan after years of peace, and the world’s government must decide the best way to combat the kaiju, which are popping up all over the world, not just rampaging Tokyo, with Anguirus in Texas, Battra in France, and so many more. More and more kaiju appear across the globe wreaking havoc and it shows how the modern world is attempting to quell this monster uprising. The book has a satirical element to it as well, highlighting certain political and social commentary of the time, which has been a key part of Godzilla’s lore even from his beginnings in 1954. Kingdom of Monsters is a very easy introduction to the Toho verse of kaiju for those who are looking for a place to start without overwhelming the readers with too much kaiju lore, or some of the more out of this world story telling of the late ‘60’s and ‘70’s Godzilla films tend to have. The story follows a group of scientists, a soldier and child survivor through the events of the kaiju destruction, and delves into the real reason all the kaiju have decided to break their silence. Some lore is changed up during this series; one major change comes from the aspect of Battra and Mothra. Instead of Mothra being able to communicate through the fairies, the Shobijin twins of Infant Island, Battra is controlled and summoned by psychic Wednesday Addams like twins in France who want to be the queens of the world. It is definitely a wild ride for those who want to know more about all the monsters in Godzilla’s world. Don’t forget to ask your neighborhood Bedrock City if they have any of the exclusive covers for the #1 of this series in their bins! 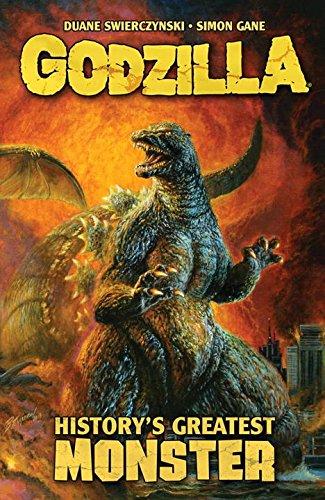 If you take the concept of The Boys and combine it with Godzilla, you get History’s Greatest Monster. Ex-special forces turned bodyguard, Boxer, has a personal vendetta against Godzilla. After a Godzilla attack kills his daughter as well as his charge’s daughter, Boxer gathers an A-Team style special force unit to take down Godzilla and other kaiju. Boxer and his team extort the world’s government for one billion dollars per kaiju they defeat and capture. As his team takes down the kaiju they get taken to Monster Island where black market dealers are trying to figure out how to control them as weapons. This is another title that features so many of Toho’s monsters and takes a hard look of the negative aspects of seeking revenge. Now I truly enjoyed reading  History’s Greatest Monster due to my recent watching and rereading of The Boys. Seeing that concept taken on a franchise like Godzilla was fun, unexpected and refreshing for a title like this. While reading a Godzilla book or watching a Toho film, the human characters aren’t really the most important focus, but there were times I found myself wanting more back story for some of the characters and their personal reasons for joining Boxer’s team. Definitely an underrated read! 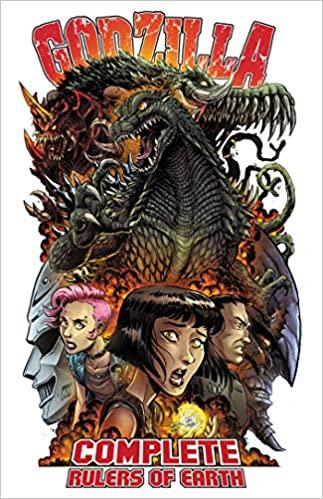 Godzilla Rulers of Earth is the culmination of all of Toho’s history, mixed in with some new world building and characters. This series pulls a little bit of something from the previous series, Commander Steven Woods (Godzilla Kingdom of Monsters) and kaiju watcher Lucy Casprell must find out why all of the kaiju have begun to cause destruction again throughout the world. Little do they know their problems may not originate on earth. Chris Mowry and Matt Frank do a fantastic job at creating new lore and combine all of Toho’s kaiju in this series. I never once felt like one kaiju got more attention than another and the pay off feels like reading a story from the Heisei and Millennium era of the Godzilla films. Matt’s art also lends itself to make it very distinct from previous series as well and defining himself in the long history of Godzilla! 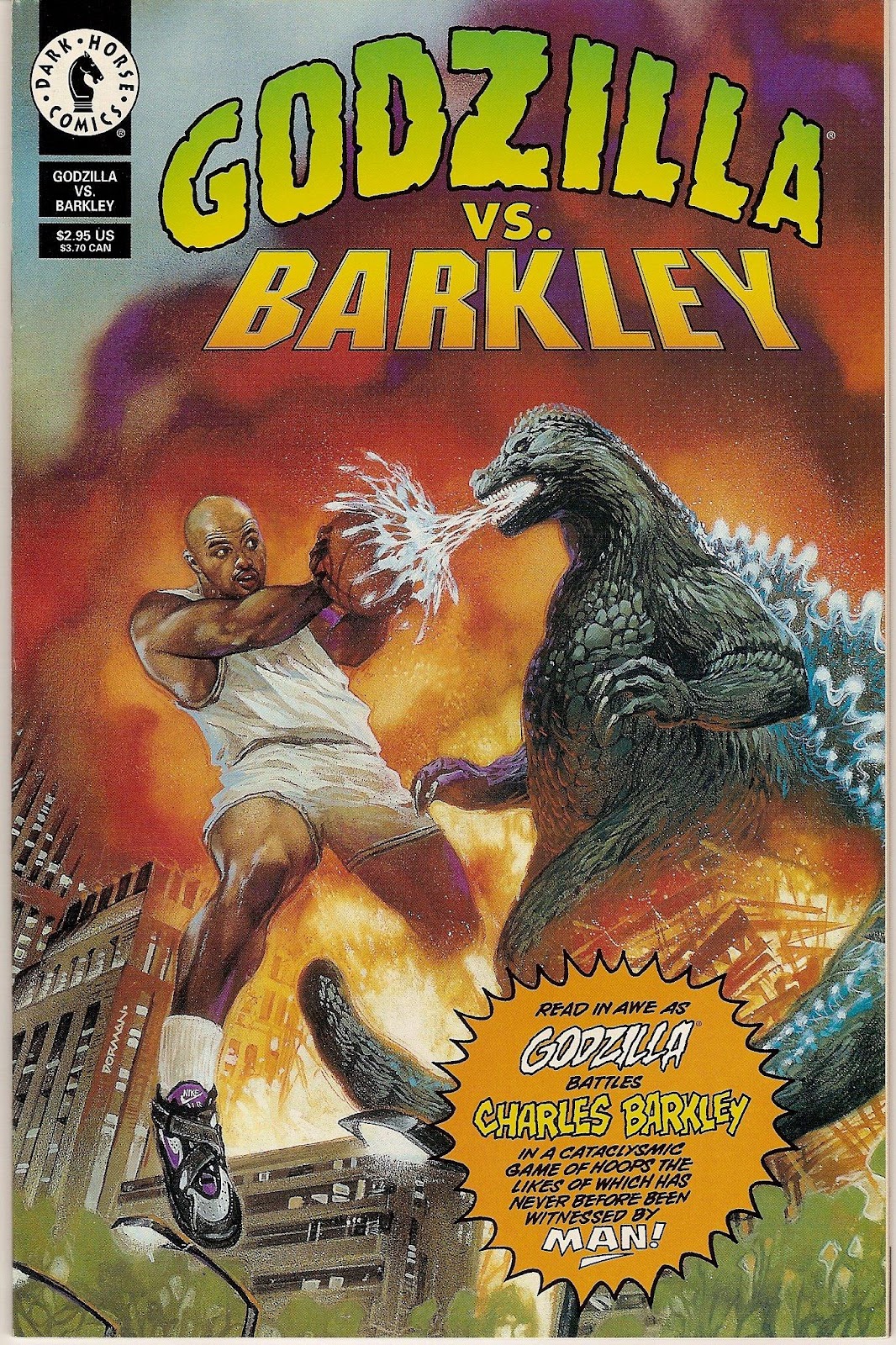 So, this is overly hopeful but if the big bad of Godzilla vs. King Kong isn’t Charles Barkley and it doesn’t end in a basketball match….I don’t want it. (This is my personal favorite on this list!) This is Godzilla’s biggest challenge yet; Barkley comes to California to challenge Godzilla in a one on one game of basketball, and all joking aside, this one shot comic published by Dark Horse Comics was inspired by a 1992 Nike commercial with the same plot and it still holds up. I really think Godzilla would have been great as part of the Lakers A-Team, haha! This is a title that doesn’t back down from the camp of the early Godzilla films and I highly recommend this title just because it is so much fun! 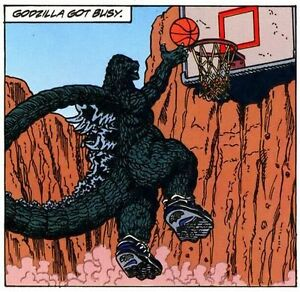 Now regardless of which titan you are rooting for in Godzilla vs. Kong, it’s so much fun to go back and acknowledge the long comic history of Godzilla (and Kong as well but that may serve for another post!) and delve into what makes these characters timeless. Thank you for giving this a read and be sure to check out these books and more at Bedrock City Comics!