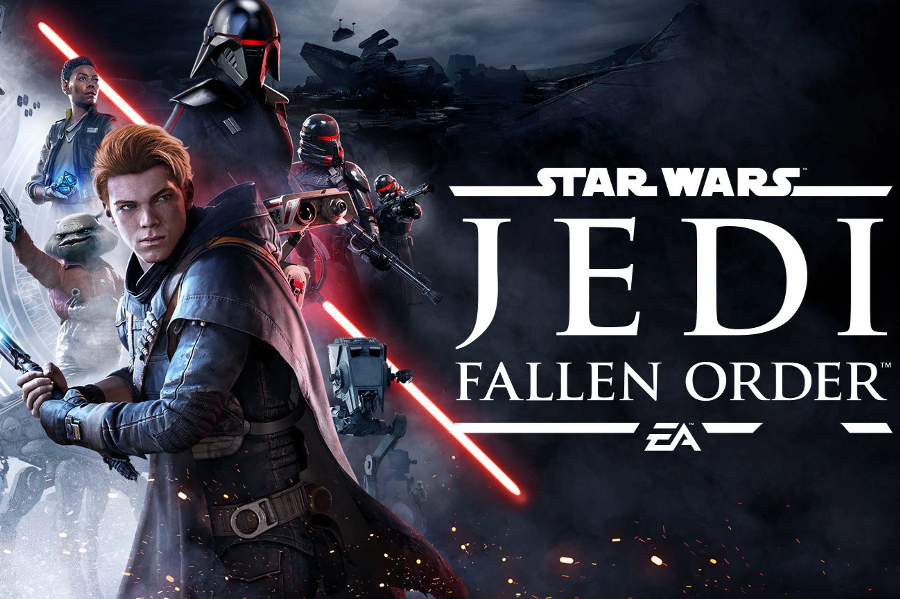 If you have ever had a conversation with me at the Clear Lake store you know how much the Star Wars franchise means to me and now more than ever it is a really good time to be a fan. In regard to games, films, and TV shows, there is so much amazing content being put out right now it’s so easy to get engaged in these worlds and be left wanting more. If you’ve found yourself watching or playing any of these lately and looking for more, at any Bedrock City location will have some titles to quench that thirst for similar content.

Having just beaten this game last night, I can’t get it out of my mind. This game by EA Games delves into the life of a former padawan named Cal Kestis (joined by the new companion droid BD-1!) who escaped the Jedi Purge and finds his path in trying to restore the Jedi Order and discover the secrets of a lost civilization. This title takes place during the Empire’s peak and explores many old and new locales and characters from the Star Wars expanded Universe and like I said, its worlds and culture scratch the surface of the history in its wake. With its plundering tombs, Inquisitors and Nightsisters, the fall of the Republic, these titles will satisfy those looking to know more about the history of the plotlines in this cinematic game. These titles listed I absolutely recommend if you loved any part of this game as much as I did! 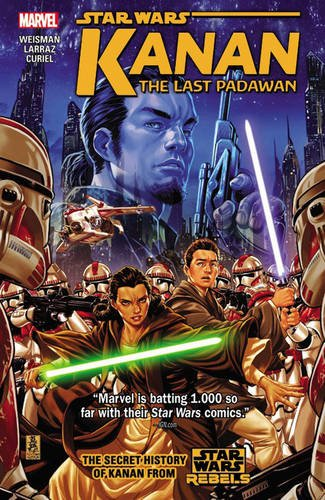 As a huge fan of both the Clone Wars and Rebels animated series, this title won me over right away. This title follows the seconds after the infamous Order 66 the young padawan Caleb Dume and how he ultimately becomes the cowboy inspired mentor and jedi-on-the-run Kanan Jarrus. The premise nearly mirrors Cal’s and the artwork by Pepe Larraz is as breathtaking as the game. One of the most underrated Star Wars comic titles and I absolutely recommend giving it a read! 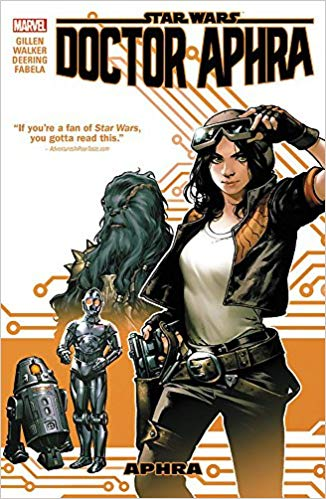 If you kept up the the 2015 Star Wars: Darth Vader series at all you are already familiar with the fast talking archaeologist and droid reprogrammer Doctor Aphra. At the end of the title you believe her days are numbered after she betrays the Dark Lord of the Sith in pursuit of her own interests but she absolutely blossoms in her own title accompanied by the two reprogrammed murderous droids Betee and Triple Zero in this tale that shows the underworld and pillaging artifacts of Star Wars in a way not previously explored. In Jedi: Fallen Order, Kal is tasked with investigating a lost civilization through the Force and evading the empire in an almost Tomb Raider/Uncharted fashion and if you loved those aspects, this title is definitely in your orbit. Now this titles I would 100% recommend for those who are enjoying The Mandalorian TV show on Disney plus as well as Fall Order with it’s incorporation of said Mandos/Death Watch in the plot but I added it here under Fall Order because of the history of the Nightbrothers and Nightsisters and the magic and lore behind the Planet Dathomir which is so prevalent in the game. If you love the Clone Wars Era and the mythology of the Zabrak, you will love this book! 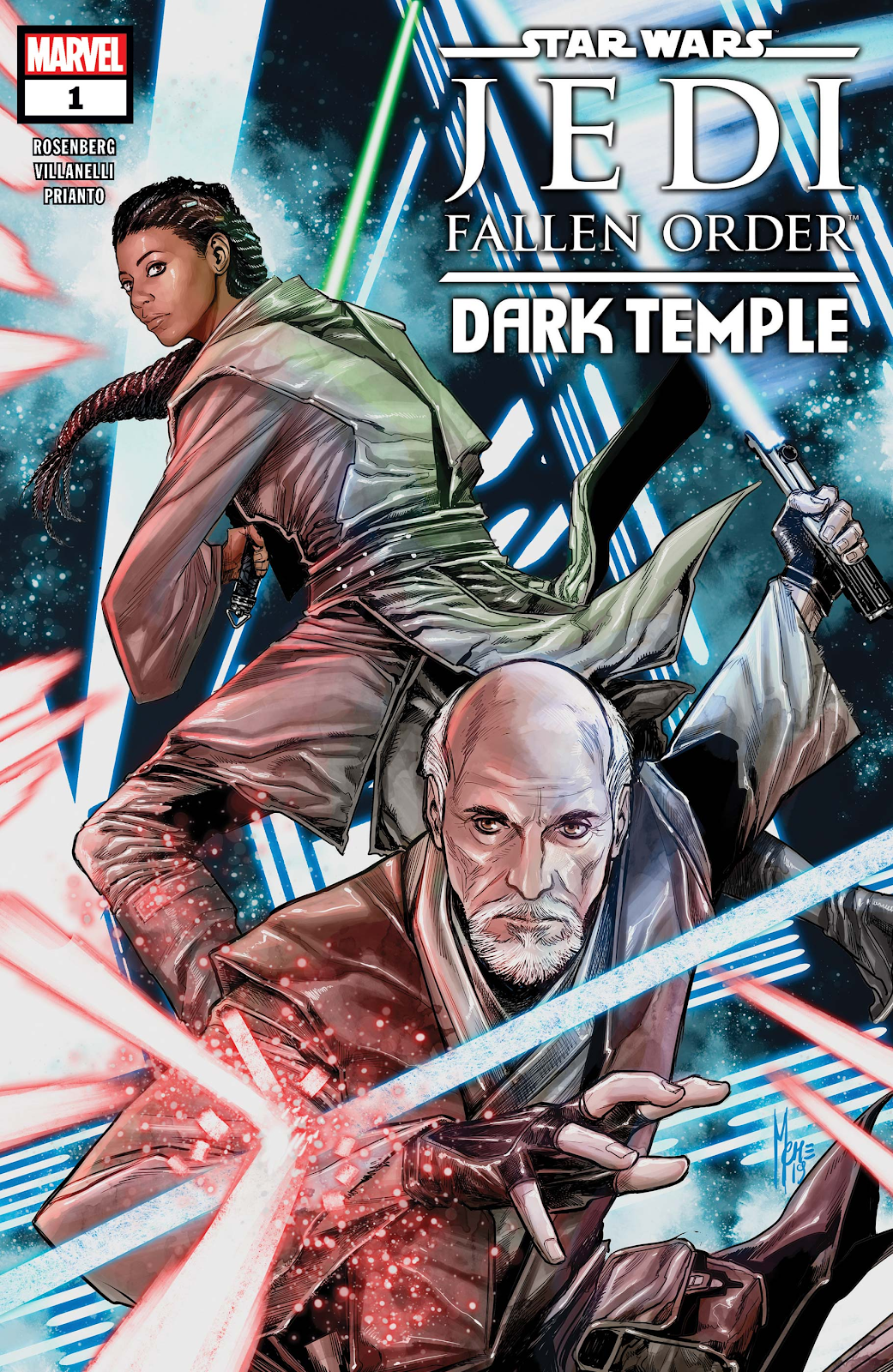 This mini series serves as a prequel to this blockbuster game, delving into the history of Jedi Master Cordova, who in game is searching for the remnants and lost history of a  species known as the Zeffo, and the Jedi Master Cere Junda before she takes the helm of Cal’s mentor in the game.

In TV…. The Mandalorian

As of writing this article, episode three of this breakout hit show just aired this morning and I speak for many in saying eac episode is getting even better than the last in the most incredible ways. This show is a true love letter to the original trilogy of films and the shows animated exploits in live action and features the lone gunman and protagonist, The Mandalorian, making his way through the galaxy in a post empire era. Showrunners Jon Favreau and Clone Wars alumni Dave Filoni are helming this project and they have certainly gone above and beyond my every expectation. It has a feel of old samurai and western films as well as tipping its hat to what made us all love that galaxy far, far away and if you can’t get enough I would recommend these titles to you! 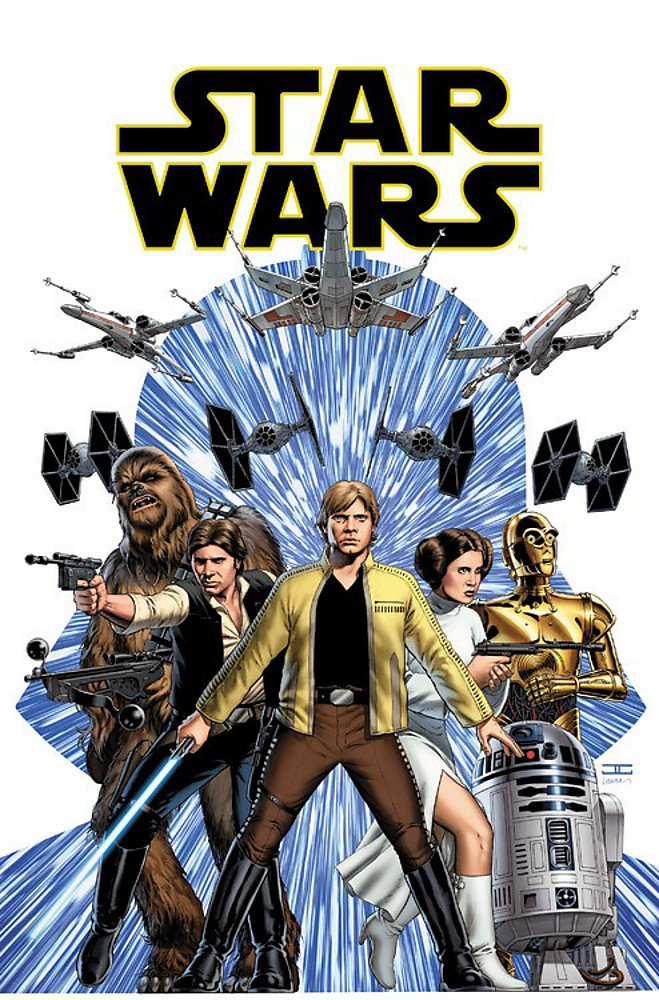 The current Marvel Star Wars comic actually just ended its 75 issue run but the first volume remains as one of my favorites of the Star Wars canon. This series takes place in between the events of A New Hope and Empire Strikes Back and there is a sizeable chunk in this first volume featuring films favorite bounty hunter in which he reveals Luke’s identity to Vader himself and the dynamic storytelling kept me on the edge of my seat the whole read. If you are a Star Wars fan and haven’t read this run, this series carries the action and of course the call backs to the films the fledgling live action series is becoming known for. 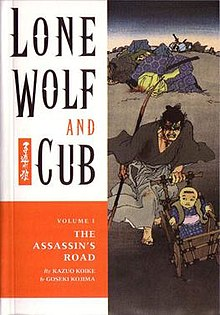 Now this list of recommendations is of course spoiler free but there is a major aspect of this show that definitely mirrors Kazuo Koike’s masterpiece. This classic manga depicts a ronin and his young son on a perilous journey of revenge, and it is no secret that the original Star Wars films took heavy inspiration from old Samurai tales and Japanese bushido code and this episodic tale is no different but pulls it off in a masterful way. Despite its ties to the “larger world” this manga is a classic and any comic fan should have it in their collection. 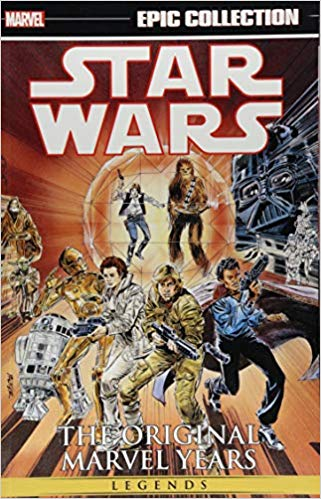 Much of what has been long documented as canon of what we know about Mandalore is now considered legends but it is definitely still prevalent in what we see in the new lore today. The best was to read the old history of characters like Jango Fett, Fenn Shysa, and of course Boba Fett is in the Marvel Epic Collections, such as the Menace Revealed, The Empire vol. 4. and the Original Marvel Years TPB’s give you a perfect insight on the established culture and mystery of this race. 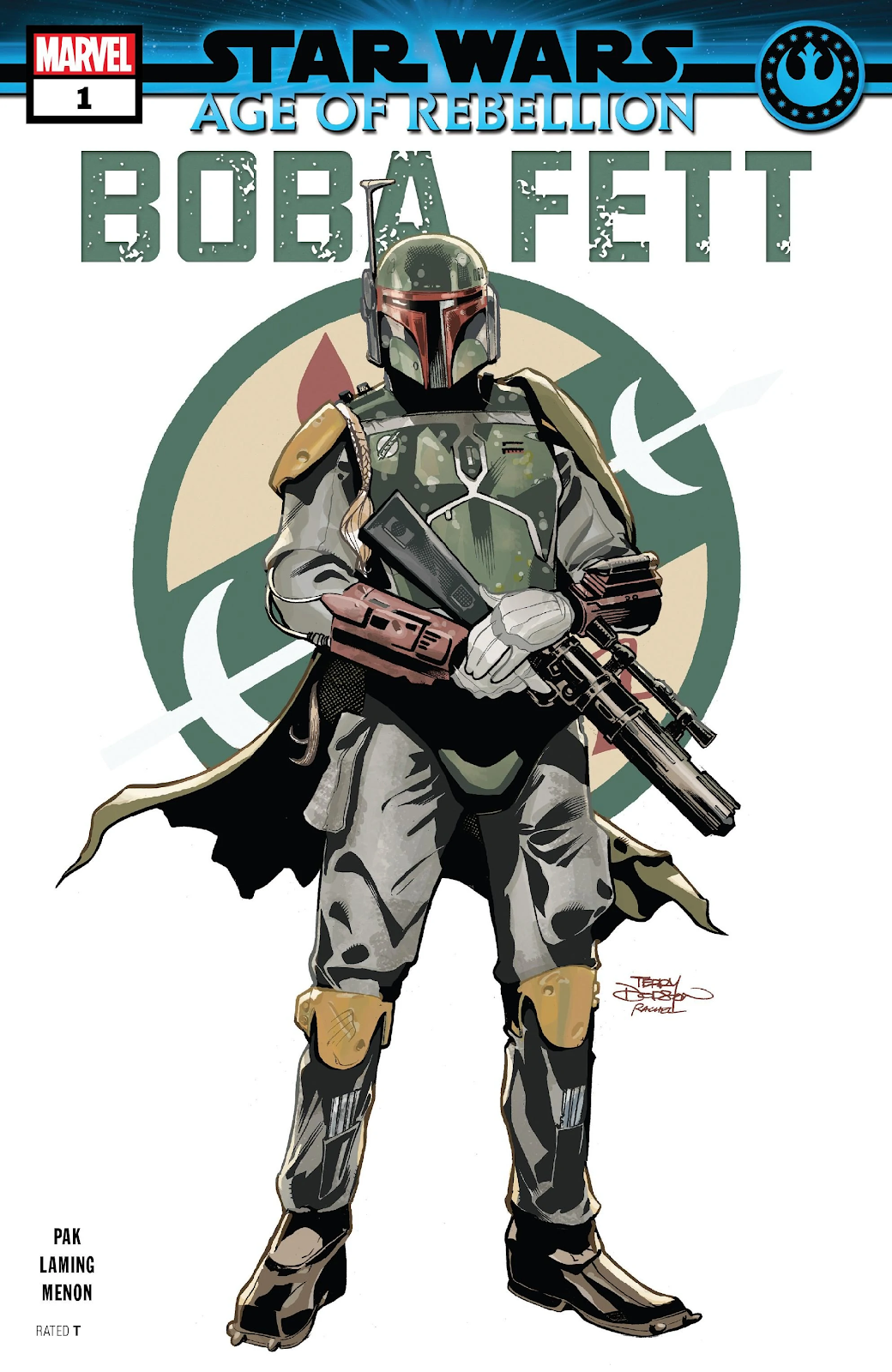 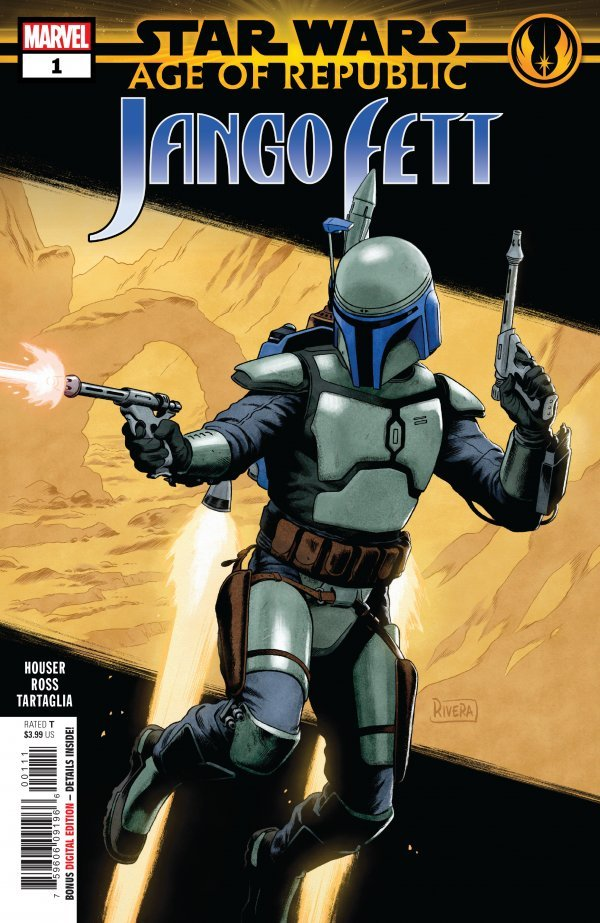 (Two recent back issues that I loved, showing a story of Jango with young Boba and a great side story of Boba Fett.) 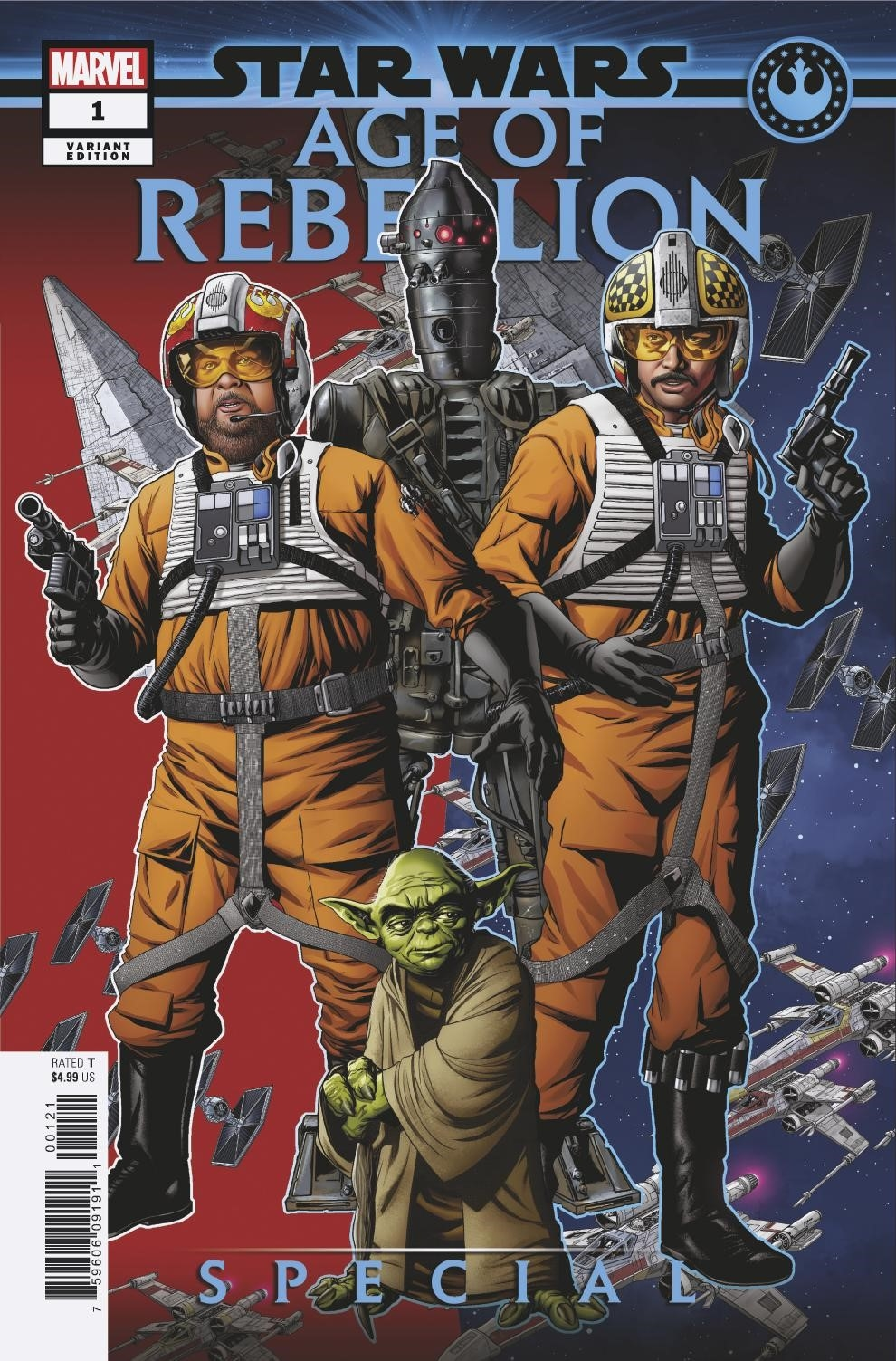 Shadows of the Empire Special 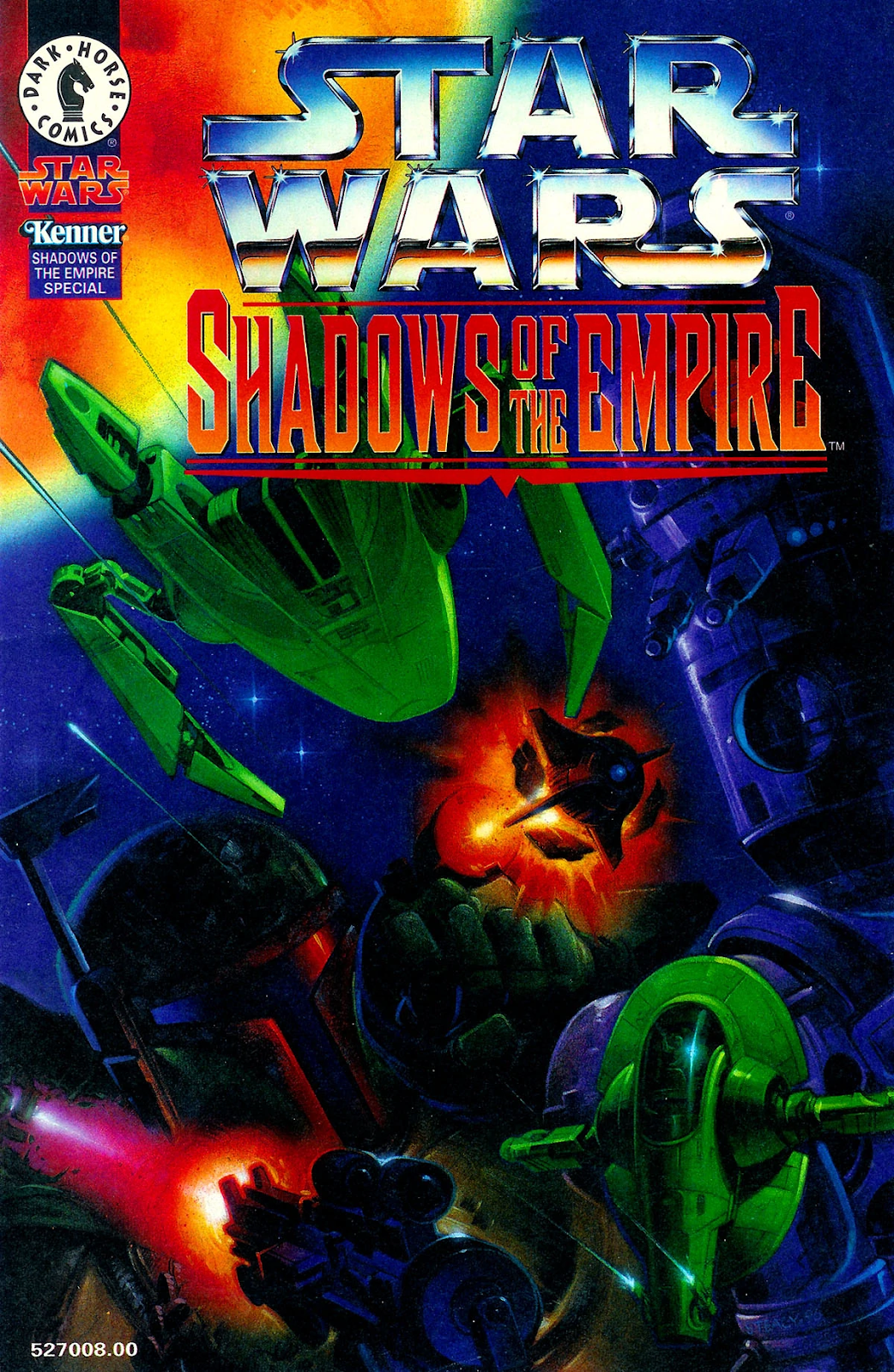 (Features the greatest fights in the old canon between Boba Fett and IG-88.) 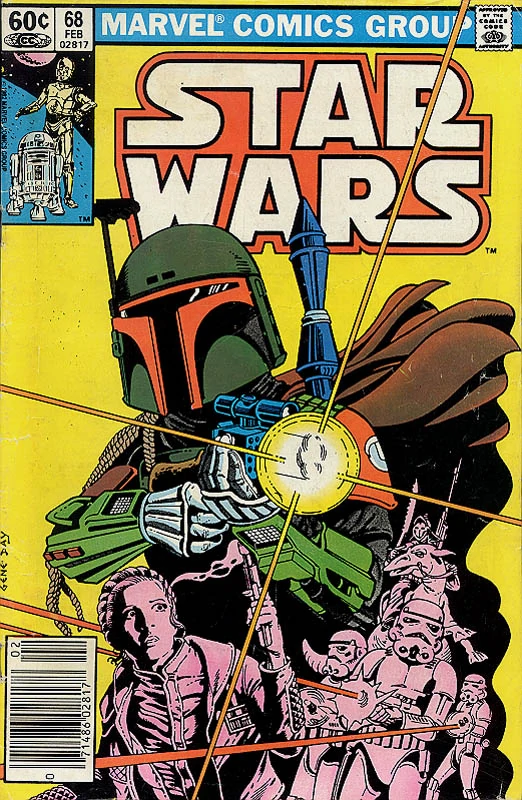 (Not to be mistaken for Boba Fett on the cover, this issue features the first ever mention of the planet Mandalore, starring the mandalorian Fenn Shysa.)

(Bonus: if you want to see another well-developed Mandalorian character by the Mandalorian’s showrunner Dave Filoni, I highly recommend the animated series Star Wars Rebels which is also all available to be streamed on Disney+. Sabine Wren is a female Mandalorian artist and rebel and one of my favorite characters in all of the Star Wars mythos and the show goes deep into the lore of Mandalorian culture. If you appreciate the love and care put into the Mandalorian, you will love this show especially the later seasons.)

In Film… Star Wars Episode IX: The Rise of Skywalker:

This title just came out in trade and it takes place before the events of this December’s blockbuster. It shows the shattered resistance in search of allies all across the galaxy and this quest leads them to Mon Cala and Admiral Ackbar’s son in hopes of gaining new ships for the cause. This is the perfect title to fill in the gap between The Last Jedi and the Rise of Skywalker! 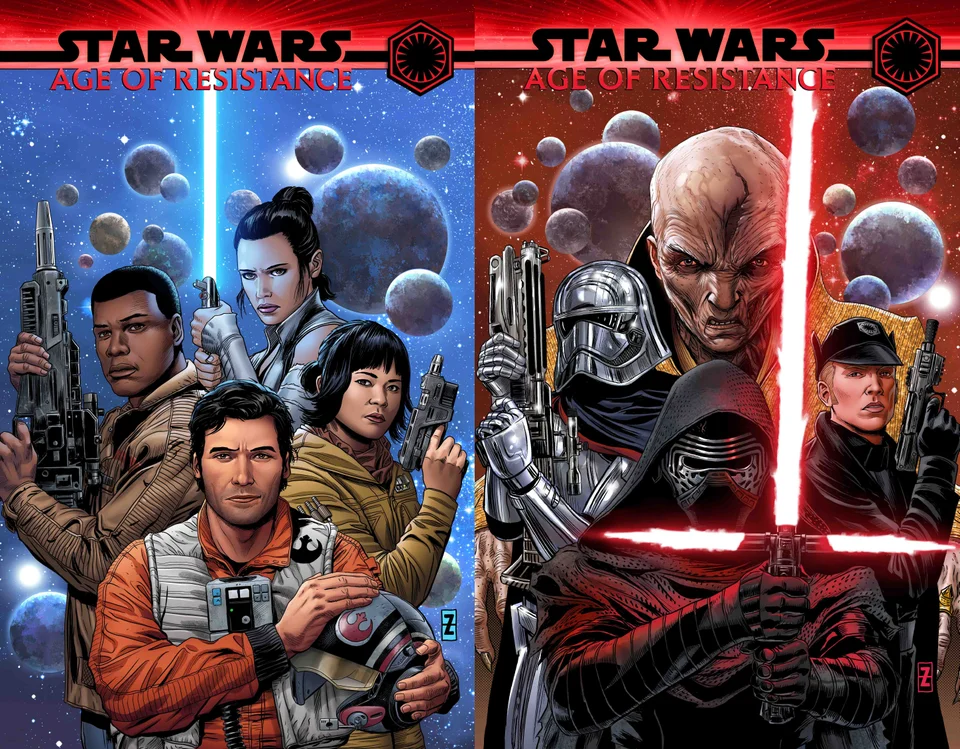 This past spring’s event The Age of Republic/Rebellion/Resistance have been a series of one-shots around prominent characters in those time periods and the Age of Resistance in particular provides insight to the characters we are still getting to know in this saga. It delves into Kylo Ren’s struggles and takes him to confront the cave on Dagobah with Supreme leader Snoke, shows Finn’s time in the empire before becoming a hero to the Resistance, shows Rey flexing her piloting skills and so much more. I absolutely recommend giving this a read before this December! 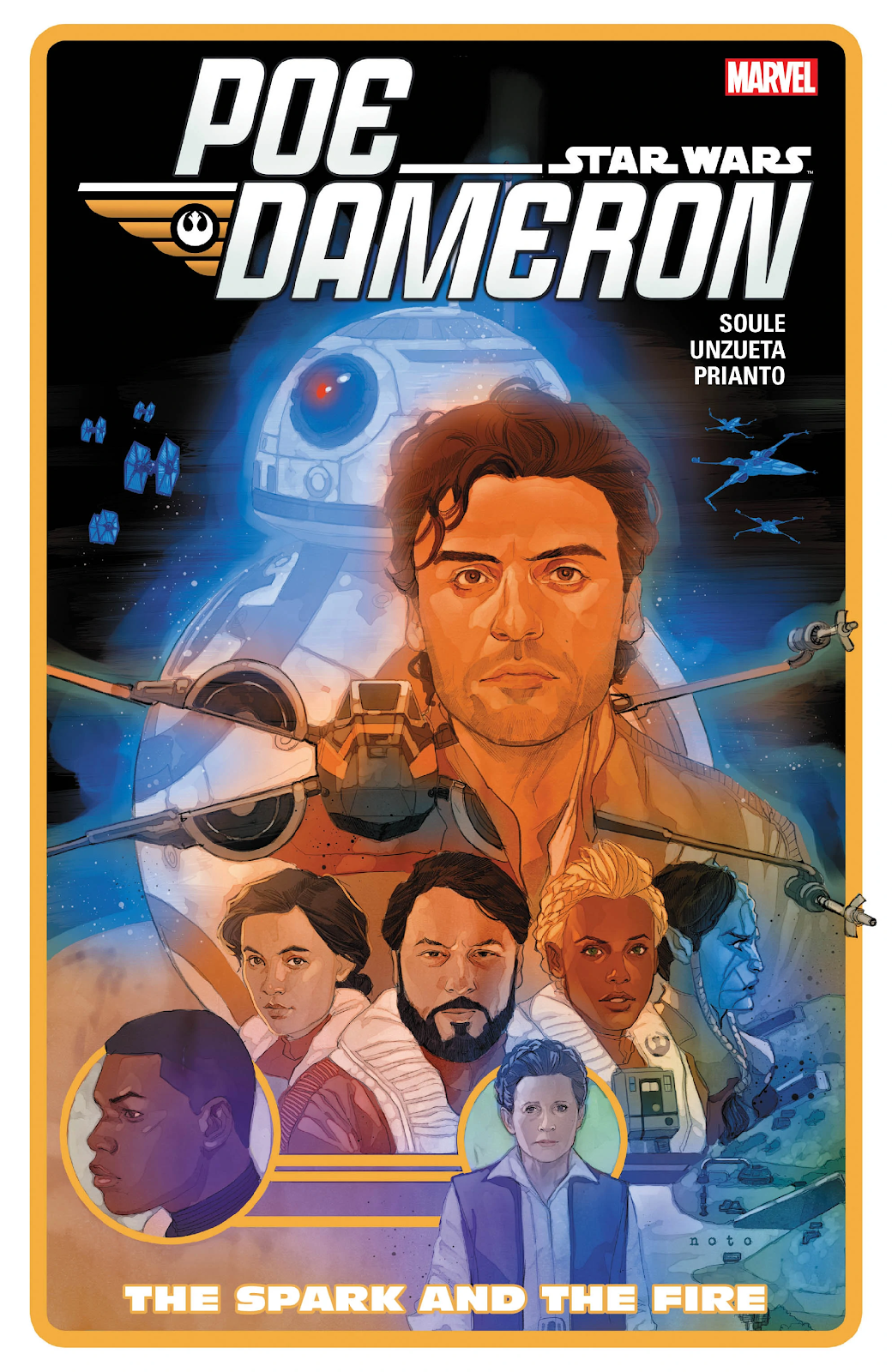 Ever since the first teaser trailer, Poe Dameron has been one of my favorite characters of the new films and this series brings out so much of that character in the best ways. It begins before the events of The Force Awakens when he receives the mission to find the acolyte Lor San Tekka on Princess Leia’s orders and continues beyond the events of the Last Jedi and shows the exploits of his Black X-Wing Squadron during that film as well. If you haven’t given it a read already do yourself a favor and pick it up! (This title actually launches December 18, 2019 so be sure to add it to your box but it makes this list because this title will show how Ben Solo joins the Knights of Ren and turns to the dark side. Written by Charles Soule who wrote my absolute favorite Lando Calrissian comic (2015) I am so excited to read this!)

Resistance Reborn HC novel ties in the aftermath trilogy of novels into this Rise of Skywalker prequel novel and shows the ties the resistance has to one another. I definitely recommend! Another show overseen by Dave Filoni is the show Star Wars Resistance, showcasing a Resistance spy trying to uncover information of the First Order before the events of the Force Awakens and even past The Last Jedi. It is on its final season and though its more comical than TCW or Rebels, I would definitely give it a watch before this new film comes out!

As always I hope you enjoyed this list and if you ever need a recommendation be sure to ask a Bedrock City employee or just talk the films with us! MTFBWY!