Roll for Initiative on these D&D Themed Titles 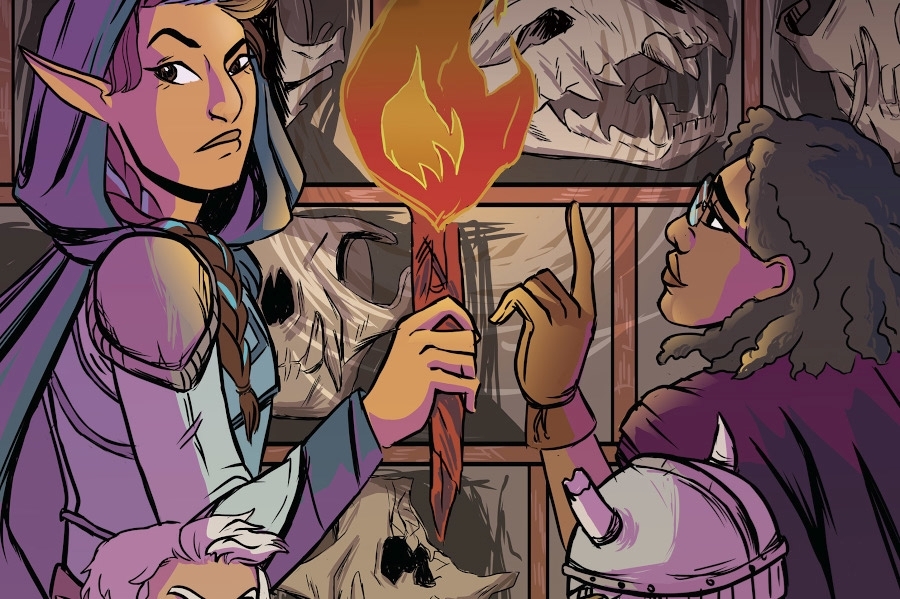 It’s no question that Dungeons and Dragons has had a huge resurgence in popularity in recent years thanks to the likes of shows and podcasts but it is also a testament to table top RPG’s ease of access as it continues its reign and likely will for years to come. But of course with things like scheduling with your groups and other outside factors you can go quite some time in between sessions but luckily your local comic shop has the perfect titles for any TTRPG lover to hold you over!

The podcast The Adventure Zone by the McElroy brothers took the world by storm starting in 2014 and its influence is still so strong over players and listeners all these years later. There are two graphic novel adaptations of the first campaign out now with the third coming this July, there is a lot to dive into for any fan! It is a hilarious D&D campaign following the adventures of Taako (from TV!), Magnus Burnsides, and Merle Highchurch that caught the hearts and attention of so many and the comic version does not disappoint!

Critical Role is also a titan in the RPG vlog/podcast world, led by famous voice actor Matt Mercer he leads the eclectic cast of the party named Vox Machina through the world of Tal’Dorei and this comic follows the origins of those characters and is a must read for fans. The first series was published online only originally, but this one is beginner reader friendly and there is also a Tal’Dorei campaign setting hardcover to play in, be sure to check our extensive game sections for it in store as well!

Stranger Things: Other Side

Nostalgia and aesthetics along with a gripping supernatural mystery has engaged watchers for these past seasons and there are several ST comic mini series to tide over both the Netflix binger and the D&D fan. Stranger Things Otherside focuses on the time in season one when Will is stuck in the Upside Down and shows how his friends are trying to bring him back in more depth. It definitely still hits those RPG notes and I would definitely recommend a read!

The title is a little self-explanatory but this four issue miniseries follows along very much like an episode of the hit show. Morty finds someone he wants to impress via D&D and turns out Rick is an expert but gets the whole family involved in a portal jumping campaign where nothing goes the way it should and draws tons of references to both Dungeons and Dragons canon lore and archetypes of the show.

Both Elfquest and Dungeons & Dragons are products of the mid-1970’s and they have deep rooted similarities. If you are an old school fan and you haven’t read this fantasy classic, you should absolutely check it out. It is easily identifiable with its unique brightly colored art style and high fantasy elements and its story of two races of elf kind struggling to co-exist.

Baldur’s Gate was (and is) a hugely popular videogame series that was arguably one of the first big accomplishments in keeping Dungeons and Dragons relevant in the world’s eyes by expanding the medium. This comic series published by IDW in 2014 takes some of those beloved characters and new ones in that same universe and continues their legacy.

There are a countless amount of comics delving into the actual worlds of the Wizard’s of the Coasts’ ever-evolving tabletop masterpiece and IDW publishing has published the bulk of it since 2010 though even the likes of DC comics published those in the 80’s and 90’s. For those who love the history of the franchise, these comics build onto the lore in a completely new way and any plethora of titles are worth a look!

Nimona is a graphic novel by Noelle Stevenson who is the showrunner of one of my favorite shows She-Ra and the Princesses of Power on Netflix and writer of Lumberjanes, this was actually one of her first published works and it still holds up today! The titular character Nimona is an evil shape shifting sidekick in training and many hijinks ensue in her eventual route to heroine-ism and it’s the perfect read for any old or new fantasy reader!

This title is an excellent all ages title about a young woman named Luvander who is in pursuit of gold and glory but begins a quest full of magic, mystery, and secrets. The first three volumes are available now and it’s a thrilling read for every audience!

Out of this list, this is absolutely my favorite title. It takes certain RPG tropes and puts a spin on them with the focus of the manga actually being foraging and cooking what monsters they fight in the dungeon while trying to save the main character’s sister. It is absolutely hilarious and am always looking forward to the next volume, please give this underdog of a title a read, you won’t regret it!

Die is a dark beautifully illustrated title that follows the lives of a group of tabletop players in adulthood when they are faced with a mystery of their teenage years. In their youth they had a TTRPG game session and disappeared without a trace. They returned but never told what happened when the game draws them back in years later. It is a chilling mystery high fantasy tale that should be on any D&D lovers pull list!

Rat Queens is a brash hilarious story following its four heroines (and eventually more) on their money for hire quests where you slowly learn each characters story and learn to love their quirks and VERY crude humor in this fantasy world. They have the job classes of most RPG’s but they make themselves so memorable even in the first issue, it’s the perfect time to catch up before the seventh volume releases!

Coda is a gorgeous high fantasy story in a post-apocalyptic world where magic is now scarce. The artwork is absolutely breathtaking and is in my opinions one of the best titles that came out of 2019. The main character Hum is an enigmatic former bard traveling the lands writing wistful letters to his wife astride a humongous war horse of a unicorn as the 12 issue series continues so does the tale of this devastated world.

This is another one of my favorite titles on this list, it is an extremely episodic almosy Samurai Jack-esque tale about an enigmatic Nordic adventurer known as the Head Lopper along with the decapitated prophetic head of a witch named Agatha fortelling his doom through his tales. You will not regret picking up this book!

This book, like Coda mentioned above is a post apocalyptic magical story but much darker in tone and with roots much deeper embedded in Dungeons and Dragons inspiration and lore. It’s gripping and engaging and we love it so much we even have an exclusive cover for the first volume which is the perfect place to start!

There are these titles and many more for high fantasy lovers in our stores and not only that, Bedrock City is your source for D&D books, kits, dice, miniatures, and accessories so be sure to stop in anytime and share the love! And of course we don’t just carry Dungeons and Dragons in our games sections, come in and talk to your local Bedrock Citizens about what tabletop RPG’s and games suit you and your groups best!