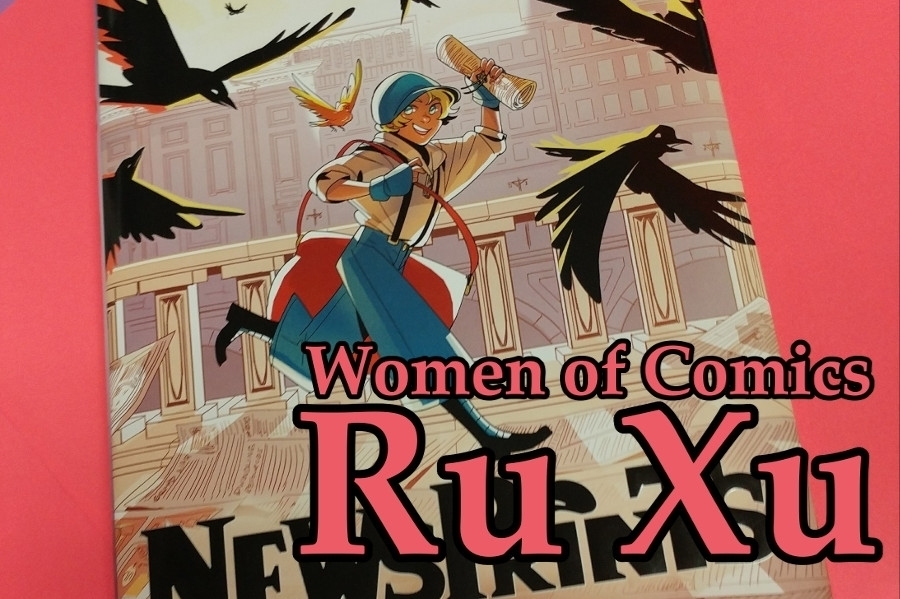 Soft colors bordered by contrasting lines make-up the majority Ru Xu’s artwork, giving it a calming, otherworldly feel. From her webcomic Saint for Rent, to her new graphic novel series Newsprints, to the various illustrations she’s done for her website and her Patreon, her artwork and storytelling breathe in fantastical pastels for all ages.

Blue loves delivering the news all across the city for the Bugle, the only newspaper in town that tells the truth! But on a routine delivery, she finds herself face to face with a strange boy, named Crow, who likes to speak in bird noises. Now, her and her new friend are neck-deep in trouble with the military who are looking for someone - or something - matching Crow’s description.

My favorite thing about this graphic novel, besides the compelling story and the endearing artwork, is the undertone of the story itself. On the surface, it’s a story about friendship through hardship and difficult times, but underneath all that it discusses a lot of topics in an easy way for people of all ages to understand. Most prevalent - and relevant to today - is the concept that not everything you read should be trusted. Blue discovers this the hard way when she’s forced to deliver news to the city that she knows is fake because she and Crow were the cause of it. This disillusionment causes her to think and understand that even great newspapers, like the Bugle, lie and that if she wants the truth, she’ll have to investigate it herself.

The second - also super relevant to today - was that women, especially young girls weren’t allowed to do jobs that were deemed too dangerous or too dirty for girls to do, like delivering newspapers around the city by yourself. Throughout the book, Blue has to prove her worth just because she’s a girl, something a lot of girls today still have to do in our society, no matter if they are just as or more capable than the boys doing the same job. Crow, himself, has to figure out his own role in this new world around him, having to decide whether or not he should accept the life of a war machine his was built for, or fly free with the birds that he loves.